In our BMS setup, the light source is a solid-state diode pumped laser with vertical polarization of 100:1 and tunable power operating at λ=532 nm. First, the laser light passes a beam-splitter with ~95% of light transmission and ~5% of reflection. The reflected light (0.5-1 mW) is used as the reference beam which is required for stabilization and alignment of the instrument. The transmitted light passes a collimator (L1 and L2) which expands the diameter of the beam and reduces its divergence. Then, using an iris, the beam is spatially filtered. The beam is directed by mirror M1 to the Glan-polarizer. The beam leaving the Glan-polarizer is a highly polarized (100000:1). Then, the half-wave plate is used in order to change the polarization of the beam. With half-wave plate, one can change the polarization of the incident light on the sample to p-polarized (electric field polarized parallel to the plane of incidence) or s-polarized (electric field polarized perpendicular to the plane of incidence) light. Then, the light hits a partially coated mirror M2 (a very small prism can be used instead) and focused on the sample through a lens (L3) with diameter of 25.4 mm and focal distance of 35.0 mm (NA=1.4). The scattered light was collected with the same focusing lens and focused on the input-pinhole of the instrument with another lens (L4). The periscope (M3 and M4) is required for directing the focused scattered light perpendicular to the input pinhole. After that, the light enters the high-resolution six-pass tandem Fabry-Perot interferometer (JRS Instruments). A specially designed stage allowed us to rotate the samples up to 80ᵒ relative to the direction of the incident laser light with an accuracy of 0.02ᵒ. With changing the incident angle, one can choose the probing wave-vector of phonons if the scattering is dominated by ripple mechanism.

Brillouin-Mandelstam light spectroscopy (BMS), similar to Raman light spectroscopy, is the inelastic light scattering of monochromatic laser light by phonons. While in Raman light scattering technique, it is possible to observe phonons with minimum energies of 250 GHz or higher at the Brillouin zone center, BMS can probe phonons with very low energies in the range of 2-900 GHz. Therefore, with recent technological improvements in our Raman and Brillouin-Mandelstam light scattering systems, we are able to observe phonons with few gigahertz up to several terahertz energies close to the zone center. Both light scattering from the bulk, i.e. the volume of the sample, via the elasto-optic mechanism and from the surface of the sample, via the surface ripple mechanism can be detected with the BMS instrument.

Suppose that an acoustic phonon (sound wave) with the wave-vector of q and frequency of ω is travelling inside the medium. Acoustic phonons propagating through a medium induce local modulations in dielectric constant ε of material from which light can be scattered1. Assume an incident light with the wave-length of λo and wave-vector ki (|ki|=2π/λo) enters into a material with the refractive index of n (Figure X2). In this case, the wave-length and wave-vector of the incident light will change to λo/n and k*i (|k*i|=2πn/λo), respectively. The frequency of the light will not change when entering from one medium into another. The light with the wave-vector of k*i and ωi is scattered into the state of k*s and ωs by the bulk (volumetric) phonons according to the following equations 1:

These equations are the conservation of momentum and energy equations, respectively. In these equations, the “plus” and “minus” signs refer to anti-stokes (absorption or annihilation) and stokes (emission) of the phonon. Photons (incident and scattered light) have a linear dispersion and thus, the frequency of the incident and scattered light can be expressed in terms of light speed in vacuum c and the refractive index of medium n as follow: 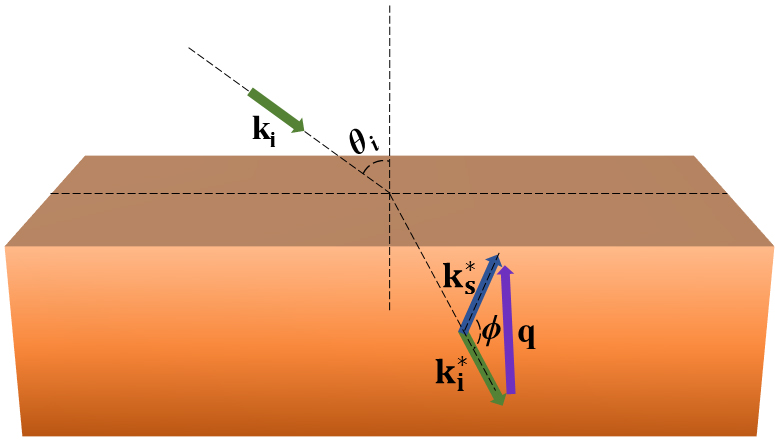 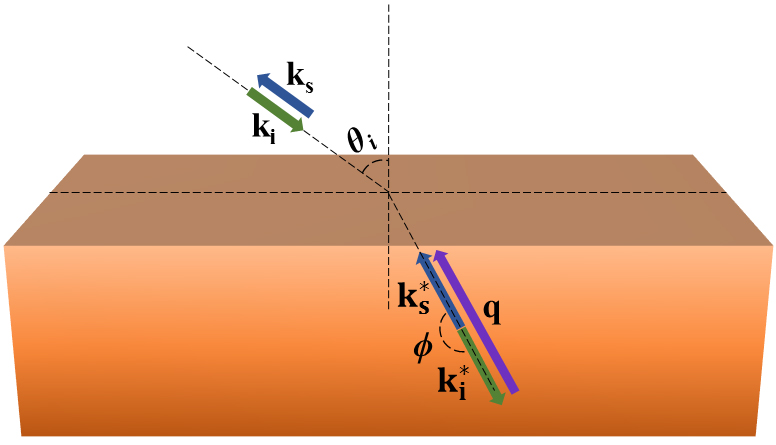 in which υ is the sound velocity in the material. Thus, with respect to equations (3) to (5), equation (2) can be rewritten as follow:

The order of magnitude of υ/c is ~10-5 and hence, we can assume that |ks| ≈ |ki| = k in which k = 2πn/λ and λ is the excitation laser wave-length in vacuum. Considering this and according to equation (1), the phonon wave-vector would be:

As one can see, in backscattering geometry, phonon wave-vector is only dependent on the refractive index of scattering medium (n) and the excitation wave-length of probing laser (λ).